skip to main | skip to sidebar

WHEN PHONES WERE IMMOBILE AND LIVED IN RED BOXES, NEW EDITION 1939— 1980 ... NOW AVAILABLE!
GLADYS HOBSON 9780954888589
Order from the publisher — MAGPIES NEST PUBLISHING ISBN
Or order the new edition from your bookshop or Internet store. Make sure you order the New Edition (pub. 2009) £7.50 as the first edition is out of print. Any problems get in touch through Magpies Nest or leave a comment on this post. 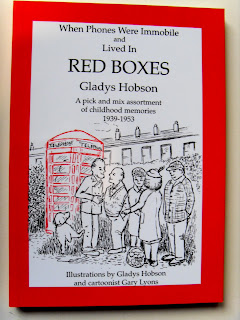 When I published my illustrated book of childhood memories, When Phones Were Immobile And Lived in Red Boxes, it had an immediate success. People even stopped me in the street and supermarket to tell me how much they enjoyed the book as it reminded them of their own youth. But people of ALL ages have either bought a copy or read a copy passed to them. Having a book passed around to family members and friends is highly rewarding, even if sales suffer. Even so, some people bought multiple copies of the book for presents and that says a lot for its popularity. You can read the first two chapters by going to http://www.magpiesnestpublishing.co.uk
Now, being a child during the Second World-War and a teenager in the latter half of the 1940's, I knew all about rationing, make do and mend, utility labelling, war effort, troops' support, war reports, air raids, black-out etc etc etc. No fancy toys in those days, nor electric gadgets. 'Elbow grease' (hard work) got clothes clean, and simple games, plus imagination, amused us. No central heating and shortage of coal kept us cool-headed and cool everywhere else too!
Because I have been asked to 'tell more' I decided to have a blog devoted to yesteryear, and to ANSWER ANY QUESTION put to me about those far-off days.

HOW DID YOU MANAGE IN WARTIME BRITAIN?
Cooking and cleaning in an age of rationing and no power points!

Domestic Science lessons in 1944-5
We had a whole day of Domestic Science in our last two years of education at the Nether Street Girls School I attended in Beeston (near Nottingham). I loved it. In those days, the school leaving age was 14. Since I left to go to the Nottingham Secondary Art School for two years at the age of thirteen, I only had one year of this delightful education. One half of the day was spent on learning general domestic skills and the other half on cookery.

The Domestic Science Department was separate from the main Victorian brick building. As I recall, it was the other side of the playground, housed in a long wooden structure put up for that purpose only.

Apart from whites, which were boiled, all washing was done by hand. We had to take truly dirty clothes to wash. We were told what to use to remove stains and what to do to remove grease and dirt. I recall washing one of my dad’s shirts — scrubbing the collar and cuffs and rinsing the garment three times. We had to squeeze the water out before hanging it dry. Whites were boiled, pulled out of the boiler with tongues into cold water, wrung out, rinsed and finally rinsed in water with Dolly-blue added. Pillow cases, table cloths, shirt collars, and such had a final rinse in water with starch added. I accidentally took a dirty hanky to be washed and had to soak the green mucus out in salty water. It was horrid. We had flat irons, heated up on the kitchen range, to press the creases out of the clothes. It was no different at home, except my mother had a big tub and a ponch plus a scrubbing board. The large-roller mangle stood in the back yard where my mum did most of the washing. Water was also boiled in a coal-fired copper in the washhouse but, since the place also housed coal and tools, there was little room to wash clothes. Clothes were hung on a line to dry. Later, mum had a rack on a pulley to dry clothes in the kitchen. But on wet days clothes had always been dried in the kitchen. No washer or drier — no power points either! Eventually, mum was bought an electric iron, which plugged into the ceiling light socket. Then an old second-hand cleaner, which had to plug into the same place. I think mum preferred the sweeping brush and mop.
We were taught about dusting and general housekeeping. Setting the table and catering for guests came in the second year.
Of course, no crease-free clothing in those days.

Cookery.
Everyone loved cooking. We were taught all the basic recipes for main meals, puddings and cakes. Nothing fancy, rationing made sure of that. But every girl was expected to be taught to run a home economically. We took ingredients to school to use. But it was possible to buy certain ingredients if our mothers had not sent anything. Basic stews and pies, sponge puddings, tarts, biscuits, scones, different types of pastry, bread, buns, simple economic dishes, basic recipe sponge cakes — with and without fat — Christmas cake and Christmas pudding and mincemeat, True, we used Soya flour for marzipan and a recipe using condensed milk for icing. The fruit for the cake and pudding was mostly dates, and, like the rest of the recipes, dried eggs replaced fresh eggs. May not sound tasty but everyone ate up and enjoyed every crumb. At school, we even had to drink the water we cooked vegetables in. In those days, peelings and such were collected by the pig-man. Nothing went to waste.
Those lessons stood me in good stead for when I had a home of my own.

Fuel was in short supply. Sometimes the gas pressure would drop and spoil the cooking, but it was eaten just the same. Coal, already rationed, was dreadfully short in winter. No double glazing or central heating. Cold draughts too. One fire in the kitchen was often kept going by using the dust from riddled coal to make fire bricks. Chilblains affected my feet badly. An elder sister who had to work nights would creep into our bed in the morning to warm up and then stay there. Her cold feet made sure we were not late for school.

REPLY: Gran Hobson, Thanks for writing to me. I liked reading your answer. This mail is something that I will not wish to loose.
I do have lots to tell you. Mostly about things you have written, like the silk industry and a few others as well. I will be sure to mail and keep in touch with you.
And never feel sorry being not able to write in my language. It’s not an International language. But English is an international language. I/We should know it. BTW, my mother tongue is Tamil. Just wanted to tell you as it is one of the oldest languages. I'm proud to be a Tamilian.
Nice to know you. Let me thank God for that. It’s tough finding good people. Really tough.
My best wishes to you and your family,

A COMMENT BY A READER OF THIS BLOG
May I just say that racial discrimination is very widely in practice here in India too, probably more than seen in England. And I've been many times a victim myself. I'm from the North-East India. I have looks much similar to the Chinese or Filipinos and a culture much different from the general Indians. When I moved to North India for college, I was abused racially, people call me by names (based on the race)...and the same goes on till today. But I've more or less accepted racism as a part of the modern culture-diversified life, and I am not as sensitive to racial abuses as I used to be.
Many Indians talk about racism in England, but often do they miss out that in their own country.

Gladys Hobson
Everything about my early life can be found in my illustrated book of childhood memories: When Phones Were Immobile and Lived in RED BOXES. Read the first two chapters at: www.magpiesnestpublishing.co.uk I also have my novels and anthologies on that site. I trained as a dress designer. Later turned to teaching. Took early retirement to train for church ministry. For the last eight years a full time writer. Personal experiences and settings tend to pop up in my stories! All my academic qualifications have been achieved in my middle and later years — as happened with most working-class achievers of my generation. I try to keep a sense of humour in all aspects of life. I can laugh at myself and at oldie jokes. But I wish the media would put less emphasis on faculties lost in old age (cause for laughter) and more on the wisdom gained. We old biddies do know a thing or two!